Home | News | Participative planning and decision-making processes take time, but as the adage goes, good things come to those who wait.

The ability to get affected parties involved in the decision-making process often determines whether a change in a region succeeds or not. Real involvement takes time and patience, especially for someone proactive who stimulates the debate and drives the process forward. In the mountain valley Schams situated in the canton of Grisons, an idea might successfully get developed, something that hardly anyone thought about or believed possible a few years ago. 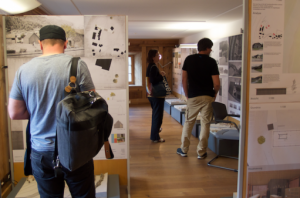 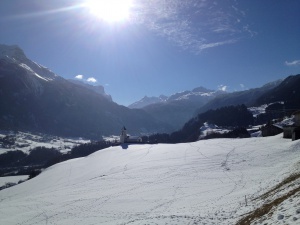 It was the year 2001 when a site planner for the new commercial zone Nislas located in Zillis in the Grisons, pointed out that not only should a conventional commercial zone be built but a place where tourism and industry come together. The starting points were the Zillis church with its world famous ceiling, visited by several thousands of people each year and, the highway on the other side of the valley, connecting the valley to Zurich and Milan. The valorisation of Nislas (a place that presently looks largely like a grey parking lot), actions to be taken and the resulting change are still open to discussion.

Nislas became part of the regional commercial zone “Val Schons”, with two additional locations in Andeer. In 2014, the seven communities involved, established a public-legal corporation as the project leader and manager of the entire commercial zone. With many vague and conflicting ideas, but in good spirits, the rough profile for Nislas was officially developed. But what next? Who should implement what and who for? Where does the investor come from? Only a handful of people participated in the first public workshop. Nothing happened for a long time after that. The initial enthusiasm had gone down.

With the model project “Natural resources as evolution engine” lead by Sofies-Emac, the discussion was launched again. In the process, the region should be developed on the basis of a sustainable valorisation of the natural resources like wood, stone, water and biodiversity. Together with the municipal authorities, entrepreneurs, representatives of the tourism department and the Beverin natural park, discussions were held repeatedly over the future of Nislas. What should the Schams look like in 15 years? What part can the local people of Nislas play ? How can Nislas become part of the “Schams-identity”? What kind of attitude towards life and climate should Nislas radiate? What fundamental idea is needed to make todays “non-place” a place?

Parallelly, during their spring semester, architecture students from the HTW Chur developed ideas for this special commercial zone. A variety of propositions on how tourism, industry and agriculture in Nislas can build a display window for the region came out. The public actively used the opportunity to look at the architecture designs displayed. A public discussion between a woman pastor, an architect and a tourism specialist on a topic related to the future role of Nislas for the Schams from the perspective of space planning, tourism and culture , attracted the public in large numbers. But the brilliant idea is still missing. However, a discussion led the community, the tourism organisation, the natural park and the entrepreneurs to pursue these propositions. Therefore an interest group (IG) will be formed in December. Sofies-Emac will still assist the process, presenting and conceiving it.

The example shows that successful planning and decision making processes, especially in the regional development and land management, need a lot of time and competence. Sofies-Emac experienced this inter alia in the project of regional development in Klosters and as a team member of regiosuisse, the national platform for regional development. If different parties want to work together, shared space and a regular exchange is needed to develop common understanding and objectives. Also, time and patience are not enough. Someone who leads the process professionally, drives and presents it is essential, otherwise it will eventually fizzle out. Communities, regions or other organisations that want to contribute to change are advised to provide enough resources towards it.

Any cookies that may not be particularly necessary for the website to function and is used specifically to collect user personal data via analytics, ads, other embedded contents are termed as non-necessary cookies. It is mandatory to procure user consent prior to running these cookies on your website.